The Fiscal Cost of Unlawful Immigrants and Amnesty to the U.S. Taxpayer

Unlawful immigration and amnesty for current unlawful immigrants can pose large fiscal costs for U.S. taxpayers.  Government provides four types of benefits and services that are relevant to this issue:

The cost of these governmental services is far larger than many people imagine. For example, in 2010, the average U.S. household received $31,584 in government benefits and services in these four categories.

The governmental system is highly redistributive. Well-educated households tend to be net tax contributors:The taxes they pay exceed the direct and means-tested benefits, education, and population-based services they receive. For example, in 2010, in the whole U.S. population, households with college-educated heads, on average, received $24,839 in government benefits while paying $54,089 in taxes. The average college-educated household thus generated a fiscal surplus of $29,250 that government used to finance benefits for other households.

Other households are net tax consumers: The benefits they receive exceed the taxes they pay. These households generate a “fiscal deficit” that must be financed by taxes from other households or by government borrowing. For example, in 2010, in the U.S. population as a whole, households headed by persons without a high school degree, on average, received $46,582 in government benefits while paying only $11,469 in taxes. This generated an average fiscal deficit (benefits received minus taxes paid) of $35,113.

In contrast to lawful immigrants, unlawful immigrants at present do not have access to means-tested welfare, Social Security, or Medicare. This does not mean, however, that they do not receive government benefits and services. Children in unlawful immigrant households receive heavily subsidized public education. Many unlawful immigrants have U.S.-born children; these children are currently eligible for the full range of government welfare and medical benefits. And, of course, when unlawful immigrants live in a community, they use roads, parks, sewers, police, and fire protection; these services must expand to cover the added population or there will be “congestion” effects that lead to a decline in service quality.

In 2010, the average unlawful immigrant household received around $24,721 in government benefits and services while paying some $10,334 in taxes. This generated an average annual fiscal deficit (benefits received minus taxes paid) of around $14,387 per household. This cost had to be borne by U.S. taxpayers. Amnesty would provide unlawful households with access to over 80 means-tested welfare programs, Obamacare, Social Security, and Medicare. The fiscal deficit for each household would soar.

If enacted, amnesty would be implemented in phases. During the first or interim phase (which is likely to last 13 years), unlawful immigrants would be given lawful status but would be denied access to means-tested welfare and Obamacare. Most analysts assume that roughly half of unlawful immigrants work “off the books” and therefore do not pay income or FICA taxes. During the interim phase, these “off the books” workers would have a strong incentive to move to “on the books” employment. In addition, their wages would likely go up as they sought jobs in a more open environment. As a result, during the interim period, tax payments would rise and the average fiscal deficit among former unlawful immigrant households would fall.

The final phase of amnesty is retirement. Unlawful immigrants are not currently eligible for Social Security and Medicare, but under amnesty they would become so. The cost of this change would be very large indeed.

These costs would have to be borne by already overburdened U.S. taxpayers. (All figures are in 2010 dollars.)

The typical unlawful immigrant is 34 years old. After amnesty, this individual will receive government benefits, on average, for 50 years. Restricting access to benefits for the first 13 years after amnesty therefore has only a marginal impact on long-term costs.

If amnesty is enacted, the average adult unlawful immigrant would receive $592,000 more in government benefits over the course of his remaining lifetime than he would pay in taxes.

Over a lifetime, the former unlawful immigrants together would receive $9.4 trillion in government benefits and services and pay $3.1 trillion in taxes. They would generate a lifetime fiscal deficit (total benefits minus total taxes) of $6.3 trillion. (All figures are in constant 2010 dollars.) This should be considered a minimum estimate. It probably understates real future costs because it under-counts the number of unlawful immigrants and dependents who will actually receive amnesty and underestimates significantly the future growth in welfare and medical benefits.

The debate about the fiscal consequences of unlawful and low-skill immigration is hampered by a number of misconceptions. Few lawmakers really understand the current size of government and the scope of redistribution. The fact that the average household gets $31,600 in government benefits each year is a shock. The fact that a household headed by an individual with less than a high school degree gets $46,600 is a bigger one.

Many conservatives believe that if an individual has a job and works hard, he will inevitably be a net tax contributor (paying more in taxes than he takes in benefits). In our society, this has not been true for a very long time. Similarly, many believe that unlawful immigrants work more than other groups. This is also not true. The employment rate for non-elderly adult unlawful immigrants is about the same as it is for the general population.

Moreover, taxes and benefits must be viewed holistically. It is a mistake to look at the Social Security trust fund in isolation. If an individual pays $3,700 per year into the Social Security trust fund but simultaneously draws a net $25,000 per year (benefits minus taxes) out of general government revenue, the solvency of government has not improved.

Following amnesty, the fiscal costs of former unlawful immigrant households will be roughly the same as those of lawful immigrant and non-immigrant households with the same level of education. Because U.S. government policy is highly redistributive, those costs are very large. Those who claim that amnesty will not create a large fiscal burden are simply in a state of denial concerning the underlying redistributional nature of government policy in the 21st century.

Each year, families and individuals pay taxes to the government and receive back a wide variety of services and benefits. A fiscal deficit occurs when the benefits and services received by one group exceed the taxes paid. When such a deficit occurs, other groups must pay for the services and benefits of the group in deficit. Each year, therefore, government is involved in a large-scale economic transfer of resources between different social groups.

Fiscal distribution analysis measures the distribution of total government benefits and taxes in society. It provides an assessment of the magnitude of government transfers between groups.

The United States offers enormous economic opportunities and societal benefits. Countless more people would immigrate to the U.S. if they had the opportunity. Given this context, the U.S. must be selective in its immigration policy. Policymakers must ensure that the interaction of welfare and other financial transfer programs with immigration does not expand the fiscally dependent population, thereby imposing large costs on American society.

Current immigration policies with respect to both lawful and unlawful immigration encourage the entry of a disproportionate number of poorly educated immigrants into the U.S. As these low-skill immigrants (both lawful and unlawful) take up residence, they impose a substantial tax burden on U.S. taxpayers. The benefits received by unlawful and low-skill immigrant households exceed taxes paid at each age level; at no point do these households pay more in taxes than they receive in benefits.

AS you know a picture paints a thousand words.  These CHARTS provide visual evidence… 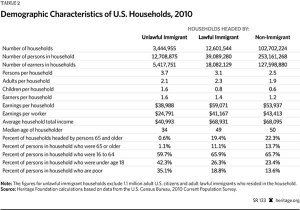 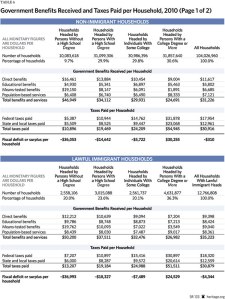 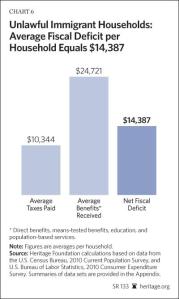 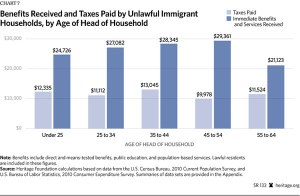 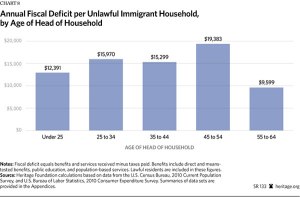 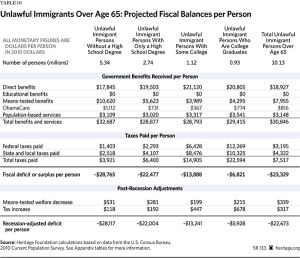 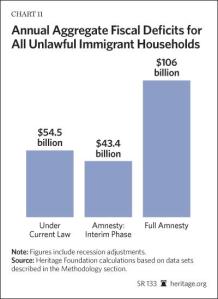 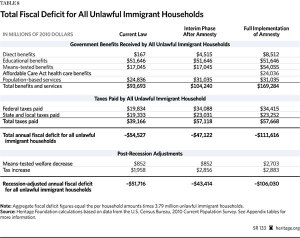 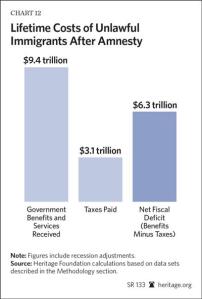 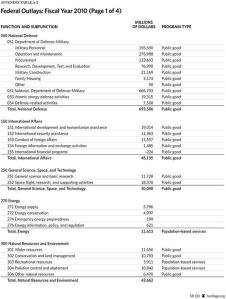 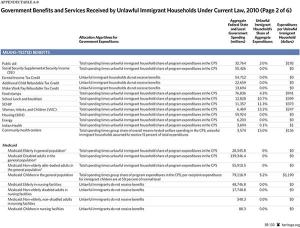 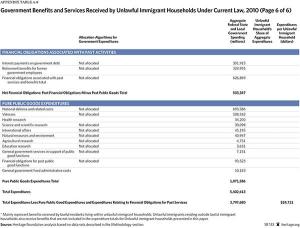 Follow Uncle Sam was Crying… Now he's out to change Washington. on WordPress.com

Chicks on the Right

Uncle Sam was Crying... Now he's out to change Washington.

The government is not responsible for you; you are responsible for “yourself.” “Knowledge will forever govern ignorance; and a people who mean to be their own governors must arm themselves with the power which knowledge gives.” “America will never be destroyed from the outside. If we falter and lose our freedoms, it will be because we destroyed ourselves”…

True Defenders of the US Constitution

I am part of the 3% and Tea Party Movement

True Defenders of the US Constitution

Smile! You’re at the best WordPress.com site ever

An Originalists view of The World We Live In Today

Common Sense Politics from a Prepper's Point of View

Constitutional Information - Pass It On!

The official blog of That Random Candidate

"I have sworn upon the altar of God, eternal hostility against every form of tyranny over the mind of man." ~Thomas Jefferson

Defending the Constitution & State Sovereignty. Fighting for our God-given unalienable rights to life, liberty, property, & the ability to defend the same.

The government is not responsible for you; you are responsible for “yourself.” “Knowledge will forever govern ignorance; and a people who mean to be their own governors must arm themselves with the power which knowledge gives.” “America will never be destroyed from the outside. If we falter and lose our freedoms, it will be because we destroyed ourselves”…

The Bible you've been missing

We moved the blog to our domain at www.MrDapper.com
The Drinking Hat